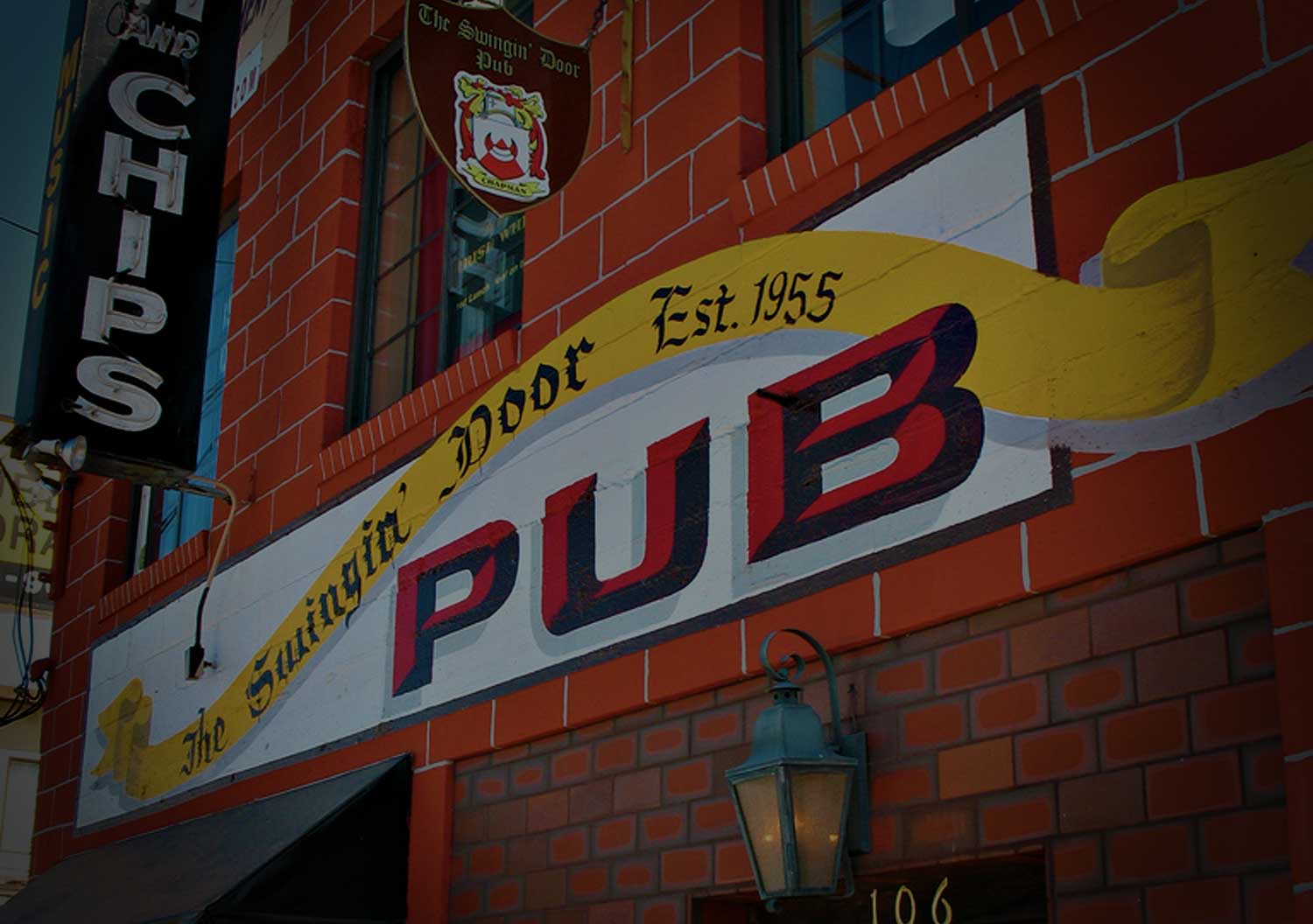 History of the Door 🇬🇧™

Built in the 1940’s, the Kehoe building was converted by the Fey Brothers (whose grandfather invented the slot machine) to a bar in December 1955. Named The Swinging Door, there were two swinging doors at the entrance. The price for a 12oz mug of beer was ¢20.

The upstairs dance floor was installed in 1956 to accommodate a dance school, which lasted for several years.

A young and struggling group name The Kingston Trio played upstairs in 1957.

The usual tranquility of the bar room was momentarily disturbed when a tear gas bomb was lobbed into the bar in 1958.

Famous jockey Willie Shoemaker dropped in during the 1958 racing season.

A seat belt was installed on the pillar near the bar for those who wanted to “buckle-up” before driving.

Hugh Courtney hung the first bristle dartboard in the bar in 1963 and the following year the first All-Star match was played here between San Francisco Bay Area and Los Angeles Area dart teams.

A Go-Go dancer did her thing in 1964 while patrons talked about Carol Doda, The Beatles and Vietnam.

Later in 1964, actor Ronald Reagan bought the bar a round in his hunt for political office.

The present Bird of Paradise “tree” was planted by Len Titus in 1966, when it was 18” tall. Now it is the tallest in Northern California.

All through these years the bar underwent many changes and many owners. Always beer bars, beer drinkers of repute (Carl, Joe, Wolf, Auggie, Mike, etc.) have been familiar faces on both sides of the taps. Keeping the action hot in dartboards has been darters (Hugh, Ralph, Trevor, Al, Terry, Walt, Parker, Phil, Dereck, Brian, etc.) of great and not so great repute.

Around 1969 an irate person delivered a gunshot from the street through the front door and into the end of the bar – fortunately the bar was closed at the time.

Shut down for several months, the bar was reopened in 1971 by Ken Gilley as The Prince of Wales with the present British décor.

Popping in and out through 1970-73 was the famous crooner, Bing Crosby, as he would quietly sip a beer at the kitchen end of the bar. During this time the fantastic Windsor Burger and delicious Fish & Chips were starting to gain local fame.

In November 2006, Warren Chapman purchased the British Pub and brought back the original name “The Swingin’ Door”. Warren was born in Manchester, England and comes from a deep heritage of British heroes. Warren’s grandfather, William Chapman of the 70th Battery RFA, was given the Battle of Mons metal. His great uncle, PTE John Chapman, was 11th Hussars. Warren’s father, Raymond Chapman was a Grenadier Guard, hence the two guardsmen guarding the outside of the pub.

A Publican is a Diplomat, a Democrat, an Autocrat, an Acrobat and Doormat. He must have the facility to entertain Prime Ministers, Princes of Industry, Pickpockets, Gamblers, Bookmakers, Pirates, Philanthropists, Popsies and Prudes. He must be on both sides of the “Political Fence” and be able to jump that fence.

He should be, or have been a Footballer, Golfer, Bowler, Tennis Player, Cricketer, Dart Player, a Sailor, Pigeon Fancier, Motor Racer and a Linguist as well as have a good knowledge of any other sport involving Dice, Cards, Horse Racing and Billiards. This is the most useful, as he has to settle arguments and squabbles. He must be a qualified Boxer, Wrestler, Weight Lifter, Sprinter and Peacemaker.

He must always look immaculate, when drinking with the Ladies and Gentlemen mentioned in the first paragraph, as well as bankers, Swankers, Theatricals, Commercial Travellers and Company Representatives even though he has just made peace between any of the Two, Four, Six or more of the aforementioned Patrons.

To be successful Warren must keep the Pub full, the House full, the Storeroom full, the Wine-cellar full, the Customers full and not get full himself. He must have staff who are Clean, Honest, Quick workers, Quick thinkers, non-Drinkers, Mathematicians, Technicians and at all times to be on the Boss’ side, the Customers side and stay the Outside of the Bar.

TO SUM UP: Warren must be Outside, Inside, Offside, Glorified, Sanctified, Crucified, Stupefied, Cross-eyed and if he’s not the Strong Silent Type there’s always Suicide!!!